I’ve seen so many conflicting posts about Sky Fibre DLM that I wanted to write about my journey and own experience since signing up for the Sky Fibre Max service.

As a long term Sky customer, I’ve written a couple of other posts about my ramblings including how I resolved Audio Drop Outs with Sky Q and even how to use a Billion Router on the old Sky Broadband so it seemed like jotting down the details of our Sky Fibre Max install was a relevant thing to add.

We moved into a new property during the summer and due to lack of Fibre to the Cabinet (FTTC) coverage in our village, we had Sky Broadband Unlimited installed.  The speed was pretty good for ADSL (15mbs down / 1mbs up) and the stability was fine.

In December OpenReach finished the installation of the FTTC service and orders opened for the exchange including Sky Fibre.  I was delighted to see that our area was enabled for Sky Fibre Max (80mbs down / 20mbs up) and as we were already Sky Q customers we jumped straight in.

As a long term Sky customer, I’ve written a couple of other posts about my ramblings

The installation happened fully remotely and on day one, we had the following stats: 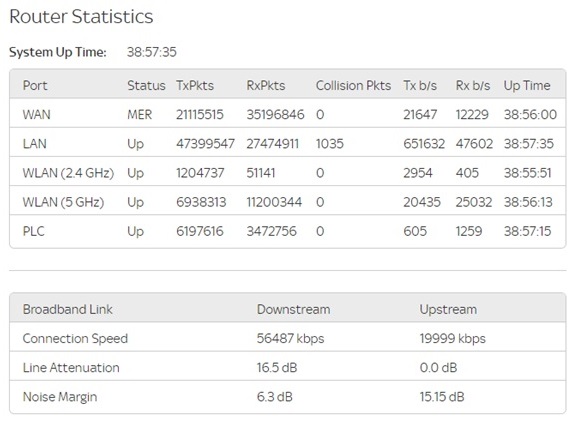 I had seen the line sync at 79mbs to begin with, but this only lasted for about 5 minutes before the router rebooted and came back up with these figures.  At this point, I was actually very happy.  To have improved the connection from 15mbs to 56mbs (throughput of about 53mbs) was fantastic.  The additional 13mbs above the standard 40mbs / 10mbs service also felt like value for money.  The thing I was most impressed with was the 20mbs upload – this meant that full HD game streaming was now possible (something I was considering getting into).

In short I would have been very happy if these were the final stats the line was capable of.  But my friend Mr DLM wasn’t quite done with me yet.

We are about 300m (in a straight line) away from the cabinet, so I was aware that these figures were likely to improve – I just wasn’t sure by how much.

The line stayed up and the router was left alone.  At around the 12 day point the router got rebooted and came up with the following stats: 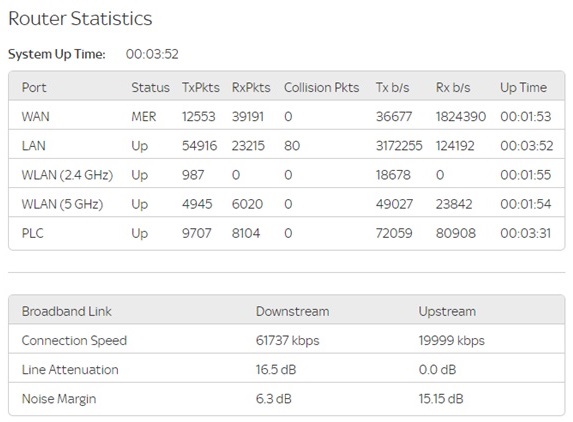 The thing I found interesting with these numbers is that the SNR (6.3dB) and the Line Attenuation (16.5dB) had not changed, yet the Connection Speed (sync) had jumped up from 56mbs to 61mbs.  Happy days.

When I tested throughput, the line was running at about 58mbs / 19mbs which was another improvement.  At this point, my interest peaked and I started to wonder if the SNR might drop down to the fabled 3dB.

Sure enough, when I took a look the following day (now about 13 days after install) I could see the following: 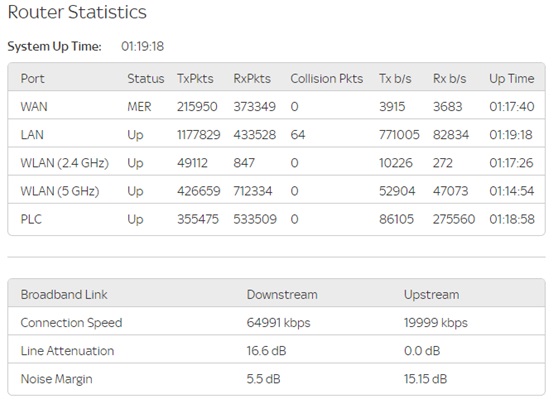 The SNR had started to drop!  I wasn’t overly excited about the fact that the sync had gone up slightly, but because the sync had dropped below 6dB this had me convinced that the line was trying to get down to 3dB.

Imagine my excitement when I took another look a couple of days later and saw this! 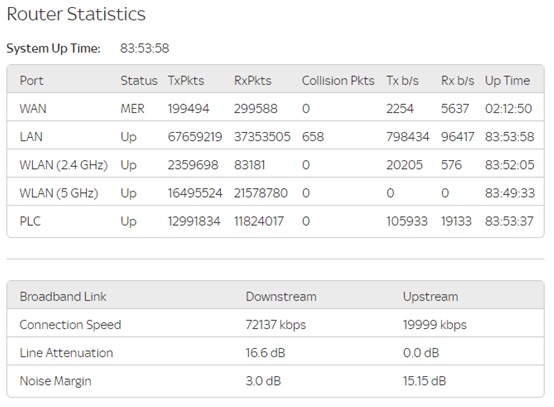 My cheering and dancing antics were met by the usual sighs and groans from the wife and kids but it had happened, the line had dropped down to 3dB SNR and rewarded me with a 72mbs / 20mbs connection.

I tested the throughput and was consistenetly getting about 67mbs down / 19mbs up.  For me this was very unexpected but very much welcomed.

But was the story over?

Well as it turned out, no – not by a long shot it seemed.

I logged on a couple of days later and was greeted with this: 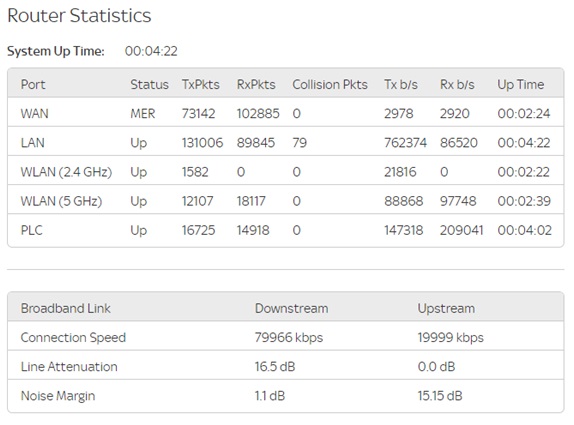 I took one look and then closed the browser, in disbelief.  When I then realised that I’d just wasted time – I then logged back in for another peek and sure enough, I wasn’t dreaming.

I tested throughput and saw about 70mbs down / 19mbs up but I was more concerned with the 1.1dB SNR.

I’ve never even heard of an SNR this low and fully expected the line to be unstable, re-sync or just under perform but nope.  It’s a bit off the throughput (although this could be a local issue, I haven’t tested with anything directly plugged into the router) but it’s stood strong and at the time of writing this post, has been up for 28 hours.

As stated previously, I had read many conflicting reports about DLM on FTTC lines in general but specifically Sky.

Some reports said it’s running constantly and will give you the best line very quickly.  Other reports stated that DLM would take 10 days and then start to work on the line stability / quality.  Some reports even suggested that the 10 day period was utter rubbish and simply an excuse companies used to not have to support customers wanting the most from their lines.

What I learned was there is definitely something running and looking to improve the line that seemed to kick in after a couple of weeks.  The only thing I had to do was nothing but wait.

Hopefully this proves useful to others.  I’d love to hear from you in the comments below around your experience of the Sky Fibre journey.

ePINIONATED relies solely on non-intrusive advert revenue. Please consider adding us to your whitelist or temporarily disabling your ad blocking software. Thank you!